Worry can negatively impact our professional, social and private lives. I have been challenged recently to view life more positively and to look for “the wonder” in everyday experiences wherever I find myself.

Thinking about this brought back a memory of a little plaque that used to hang on the wall of my grandmother’s house which read “today is the tomorrow you worried about yesterday”. It was very common at the time and I have to admit that I thought it was exceptionally corny. 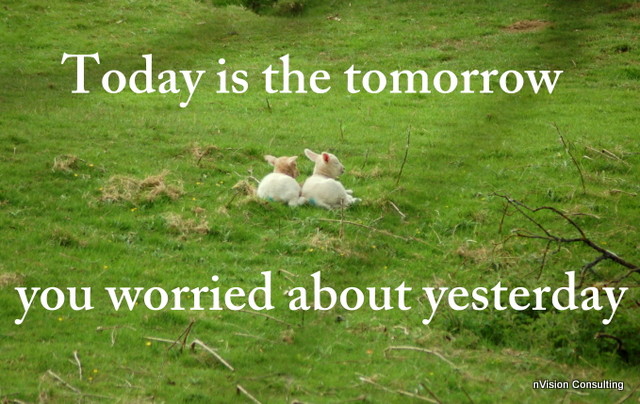 But I have come to realise that generally speaking it is a truism. How often do we worry about what might be only for our fears never to materialise? It is easy to justify the worry as planning for something so that we will know how to behave when the bad thing happens – even if usually it doesn’t. Or perhaps we subconsciously think that if we worry enough we can stop bad things from happening to us.

Mark Twain is quoted as having said something like:

I have been through some terrible things in my life, some of which actually happened.

I’ve had a lot of worries in my life, most of which never happened.

According to Freakenomics, the Yale Book of Quotations has a similar thought, long before Mark Twain came up with it.

“There are indeed (who might say Nay) gloomy & hypochondriac minds, inhabitants of diseased bodies, disgusted with the present, & despairing of the future; always counting that the worst will happen, because it may happen. To these I say How much pain have cost us the evils which have never happened!”
Thomas Jefferson, Letter to John Adams, Apr. 8, 1816

Whoever said matters less than that the point is well made. Of course I am not advocating an irresponsible attitude to being prepared for the future. But I am suggesting that worrying about what might happen can paralyse us in the present and prevent us from attempting something or from enjoying the moment. Either way it is likely to rob us of the sense of wonder that we will have experienced as small children before we learned how to worry. Even worse, excessive worrying can lead to feelings of high anxiety and even cause physical illness.

It seems to me that in many situations worry is a choice, rather like the half empty or half full cup. We might not be able to control what happens to us but we can control how we react to it.

I will leave the last words to the wise King Solomon:

Worry weighs us down; a cheerful word picks us up!