The 2014 Charity Pulse staff survey, “Reasons to be cheerful”, carried out by Birdsong Charity Consulting for Third Sector, shows clear indications of improvement over the past 12 months.

The annual Charity Pulse survey seeks to measure staff satisfaction across the VCS with a dual aim of building up over time a picture of working life in charities and helping raise the standard of management in the sector.

The survey asks questions about:

The highlights of the report are:

The report looks at the drivers for both the improvements and those areas that are not improving, and there are some helpful pointers as to where things could be done better (such as handling poor performance).

There is a great word cloud which shows clearly the wide range of views on how a charity could improve the working environment. 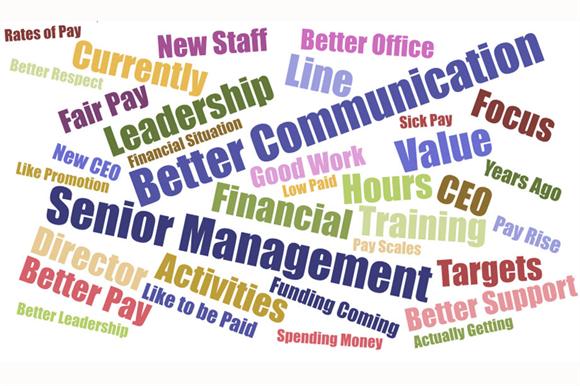 I find it interesting that “better communication” is one of the most common views given.

The report gives plenty of detail to back up its conclusions, and I find it encouraging that the answers to the questions “my views are listened to and valued”, “I feel appreciated”, and “the charity treats me with fairness and respect” show the biggest improvement from the 2013 survey and show a strong correlation to whether individuals are considering leaving the organisation or not. The report’s conclusion on this aspect is clear.

Most people working in the sector could tell you that pay is not the main motivator for charity staff. Most people could also tell you that its not really about the hours worked or efficiency of processes – important though those things are. What this analysis suggests is that its something much more basic than that – something much more human that makes the difference; really listening to staff when they tell you something important; thanking people for a job well done; and treating them like an adult.

So don’t worry quite so much about the size of your salary budget. Focus attention instead on developing an organisational culture based on trust and mutual respect.